The Sisterhood of the Traveling Hat

This past weekend, I was treated to a terrifically rare treat and escape. Friends of mine from when I lived in NM, whom I haven't seen since college, and longer, invited me, via Facebook, to join them for a Girls' Weekend in Las Vegas! Because of their incredible generosity, my only outlay was for souvenirs and a few tips.
We stayed in the VERY swanky Paris Hotel in Vegas, where I had my own room, overlooking the pool, the Eiffel Tower and the water show across the street. Not that I spent MUCH time in my room during waking hours; we were on the go from Friday afternoon to Monday midday. I honestly am amazed that I kept up as well as I did and did not collapse!
The highlight of our trip was having tickets to see Donny and Marie (Osmond) perform at the Flamingo Lounge; a very intimate and up-close venue. To my further surprise, while the girls told me "oh, we don't have very good seats", they were just teasing me! We actually were seated on the right-side half of the stage, a mere two rows back. I could see the sweat on Donny Osmond's FACE!! THAT's how close we were!! I swear when he came over to that side of the stage, our eyes met, and Denise swears he winked at us. (We were all wearing purple of some sort, for Donny, and by this time, all crying like school-girls with the newest issue of TigerBeat magazine!)
When it was Marie's turn to be on our side of the stage, we were cheering, and, noticing our purple and enthusiasm, she pointed right at us, gave us the "thumbs up" and said "you go girls!"...that was awesome!
What a dream come true to be so close to the star of whom I've been a fan since before my age had double digits! Denise even had a purple room as a youth, to show her adoration. I think it moved up past 'seeing real whales in the ocean' and into first place on my list of "most amazing thing I've ever seen"!! It definitely makes the bucket list, which I seem to be filling in reverse, starting with this amazing trip.
Donny and Marie did an opening together, then both took solo rounds, then finished together. Being so close to them, we could see the genuineness in their eyes as they spoke to one another and laughed and related with the audience. During Marie's solo time on stage, she asked a question, I don't remember what, but ended up talking to the people sitting in the front row, directly in front of us.  Stuart and Becky, from Cedar City. It was Becky's birthday, and this was her big surprise. Stuart was wearing (to a concert event) a brimmed cap from CABELA's. This may have caught her attention. She called Stuart up onto the stage and tried to get him to sing along with her. Apparently Stuart doesn't sing. Then she tried to teach him a dance step. Apparently Stuart doesn't dance. He did get to have his arms around Marie Osmond's waist, so how can that be a loss? It was all quite hysterical for us, embarrassing for Stuart. Becky, however, came out on the good end of that deal, as after Stuart returned to his seat, Marie offered them free back stage passes to the meet-n-greet after the show!!! WOW! What a freakin' amazing birthday present for Becky. We all cheered for her and patted her on the back, not without a degree of envy.
When it was Donny's turn for his stage time, he was of course drawn to Stuart and the hat. He laughed over it and asked Stuart to toss it up on stage, which he did. Donny donned the hat for a moment, laughing, then tossed it back to Stuart. We were all ga-ga over the hat. Can we hold it? Can we touch it? Can I touch it with just one finger around the inner brim where Donny Osmond's sweat now resides? Stuart let me run my one outstretched finger around the inside...then I squealed and held my hands to my face...might have looked like I was smelling the finger...perhaps I was.  Karena even made an offer on the cap, which Stuart, however, declined.
We all four cried off and on throughout the show, and really lost it at the end when Donny and Marie sang their famous goodnight song from their television show, back in the day. Tears in our eyes, when the show ended and all stood to leave, we again congratulated Becky and I realized Denise was still trying to talk Stuart out of the hat. She said later, she thinks he was more worried about going without a hat, than any sentimental tie to the headpiece. Staff were waiting to escort them to the meet-n-greet, and Stuart gave in to Denise - I have no idea what finally sealed the deal for her, and I don't want to know...she turned around to me, handed me the hat and said "this is for you!"
Flood gates open...I bawled like a baby...I could not believe that on top of all her generosity, she was giving me this hat! This hat that now bore (in addition to Stuart's sweat) Donny Osmond's perspiration! (I know this because he was really sweating up on that stage!) They made me wear it out of the theater, while I cried more and tried to wipe my eyes. Thank goodness I'd had the forethought to wear waterproof mascara that night. I took it off after some pictures with it in front of Donny's mirror ball trophy from Dancing with the Stars, on display in the lobby, but then took it off, as I didn't want to further dilute the perspiration of THE Donny Osmond!! 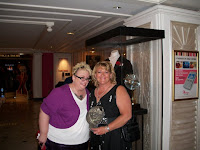 The Osmonds left us with such a warm feeling; they are working their butts off at that show right now in Vegas, and yet they smile through it all, are happy, and fake nothing. What wonderful, genuinely warm people they are. It was a privilege.
My companions, Denise, Anna-Marie, and Karena are friends from many many years ago. Yet on this trip, our personalities melded and we got on comfortably and easily, as though we hung out every weekend! I wish we could. We have so much in common, and such similar temperaments. They were all truly generous and patient and loving with me. I felt loved and cared for and truly wanted in the group. I love these new old friends and am so grateful for their love and generosity, and understanding of my abilities and lack thereof. No words can convey my appreciation, though prayers have been sent up in their behalves every night since the trip. 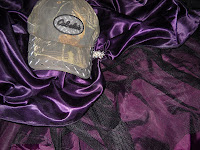 And the hat...The Hat awaits a display case where it will rest with the purple satin skirt I wore to the show. I am currently sleeping with it by my bed. I think that some day it will become The Traveling Hat, and we four will be the Sisterhood thereof.
Thank you, my dear friends, for fulfilling a life-long dream for me. Thank you for being the caring, open people that you are, and for including me on this very pampering weekend. Truly, words cannot express my gratitude.  I am truly blessed to have you back in my life, however long that may turn out to be. Thank you for accepting and not being put off by the C-word and my diagnosis. Thank you for making me feel acceptable and lovable and FUN! Pleasant memories from youth are now once again enjoyable, real relationships in my adulthood.  The years have made us stronger, and better, and smarter. Each of you possesses qualities I admire and choose to surround myself with!
You know who you are...love, hugs and joy!
Shelli
Posted by The Dirty Pink Underbelly at 12:37 AM 4 comments: