The Other Foot. When is is scheduled to fall?

I had a night of insomnia late last week. I was doing a med change, because I didn't want to pay non-generic copay for Pristiq when I didn't feel like it was a wonder drug. I was supposed to cut my dose that that in half for two week, meanwhile starting Trazadone at night, and after the two weeks was going to go on just generic Prozac. Several years ago, Trazadone was prescribed to me with Paxil, and it pretty much knocked me out at night. I think I tried the Trazadone last Friday night....and was awake until 5:00am. I panicked. I can't do the sleepless nights thing again, I can't let my schedule get completely turned around again! So Saturday night, I said, "screw it" and went back to my 4mg of Xanax, and 10mg Abmien.

A couple of days later, I found I was actually in a good mood. Huh? Wha? So I went back to my full dose of Pristiq, and I am weaning down the Xanax. 1mg Xanax last night with the 10mg Ambien. Woke at a decent hour and WANTED to get up...didn't have to force myself. I haven't taken Methyphenidate or Valium during the day all week.

Today is Thursday, and this feeling not-so-stressed is starting to freak me out. How long can this last? Could it be that Pristiq IS a wonder-drug? Could I have been having some sort of rebound effect from the Xanax? And why the heck did I say up all night on Trazadone, when it worked for me before?

Ok, maybe my body chemistry and functioning has changed since having cancer, poison pumped through my body again and again, and enough radiation to nearly give me spidey-sense. No, that's wrong...the big green guy was the radiation. Anyhow, that could explain the changed reaction. Or it could be the "possible side effect" of the Femara making Zoloft and Trazadone not have the same effect on me.

I have 2 xanax left. I'm going to try .5mg tonight. I should probably call my doctor and tell her what I am not doing (the new meds, going off Pristiq), and get her started on getting me that card from the Pristiq makers to make the copay only $25 instead of my $40 for non-generic. She said, "Look on their website", website said, "Ask your doctor". I took the info to her, she filed it for future reference as I was planning to go OFF it...but now I think I should stay on...

This morning on the way driving my son to school, I was hit in the stomach with this feeling of waiting for the other shoe to fall. I'm not used to feeling "OK", really OK, not just what we say to people when they ask how we are. (I don't say well, or good, or fine anymore; "OK" for the day is seriously as good as it gets with Stage IV cancer.) But this new mood...strange, new sensation. How long can this last?

I got a little more stressed when I called my SSDI contact, and her voicemail box was "unable to receive messages"...for the 2nd time...either she's not emptying her vm box, or she's not there any longer. Now I have to try to find someone there to talk to and explain my current issue...Hartford Disability (my long-term through work) needs "documentation" from SSDI (their mistake) that I'm NOT receiving SSI for Brad, since he is NOT a minor...spoke to both sides verbally, but Hartford wants it in writing before they will resume paying me that amount.

Eligibility for SSDI started Jan 1st. Still no check. Said to be coming in February. Meanwhile, this puts me VERY behind on EVERYTHING, and going on a month and a half with no money.

My mom is sick and so I can't go to her house. Usually I do better with phone calls at someone else's house. I hate phone calls. So, I'm a little stressed right now, but not paralyzingly so, as I usually get. Time to search through paperwork for some other contact info and maybe an ID number before I call and try to speak to a new person. Deep Breath.

"Rain on the Parade" 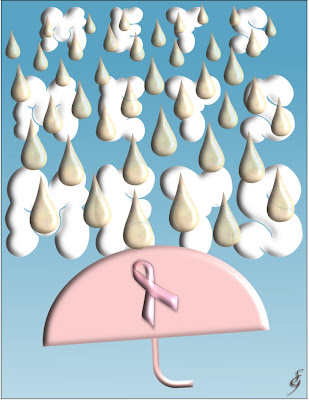 Posted by The Dirty Pink Underbelly at 9:45 PM No comments:

New Friend with an Attitude I LOVE...

I was happy today/last night to meet someone on a new site who feel rather like I do about the breast cancer "Pink Zone" as she calls it, and the METS "Dirty Pink Underbelly" as I call it. I told her I felt like I was always feeling like I was raining on everybody's pink parade at my support group. So now I'm working on an "art" project.

It's still really difficult right now. Mornings I am tired, afternoons I try to stay busy, and then evenings I get depressed and wonder how I will face another day. Counselor appointment tomorrow, so that's good timing. Dang it...forgot to go and get my prescriptions today. Changing meds again (not cancer meds), just the depression, sleep, anxiety meds.

I thought I had more whining to do, but I think I'll go read my new friend's messages again!
Posted by The Dirty Pink Underbelly at 8:21 PM No comments:

Yeah, bad words...running through my head. But listening to my uplifting music and trying to get through this part of the day.

I did not even take a baby step today. Unless paper-clipping two important papers together can count as a baby step.

Missed church yesterday. Had my clothes all laid out, bag packed with music, scriptures, everything...then woke up and could barely move without pain. Even the knuckles in my toes hurt! Could barely move my fingers, knuckles hurt so badly! Arms and shoulders too. Didn't know to what to chalk it up until I heard on FB from a friend that she couldn't get up either and said it was her fibromyalgia. So...something in the weather, must have been my fibro. Stayed in bed nearly all day, missed church, showered later (new thing; standing in the shower and crying), went back to bed, got dressed only because Mom was expecting us for dinner. Had to take the walker! Got some ibuprofen on the way (of which I was out) and have been taking that.

I hated missing church, now that I'm able to get there. And choir practice! Staying on the ibuprofen, the only pain med I am on, and it helps me walk easier. More easily. You tell me, Mary. But...hearing that it was blamable on the weather, I was oddly relieved that it wasn't cancer having a growth spurt overnight!

I have been reading blogs and posts of fellow METS survivingers...surviving day by day...and people going on and on and on...cancer spreading, more chemo....still going on and on...GOOD ON THEM!! But I don't want to go through all that!! I want to go in for a scan one day and have my liver be COVERED in inoperable lesions and those effing ridiculously low numbers that I don't trust anyway having gone SKY high....couple weeks in and BAM...Alma 40:12.

Seriously, my doctor telling me that the 5-15 yrs my radiologist told me is "best case scenario" is starting to seem a bit low-balled! I'm thinking too much about it again, and stressing...because I have so much to stress about!

Sister helping me with the logistics of the fiscal solutions (ah ha, make sense out of that!), and she says "baby steps, just do something each day"...but some days I just can't do it! And I need to go faster, get this crap done!! They keep telling me if I can get through this fiscal crap, get on a level playing field, so to speak, I'll feel so much better...and then be able to try to make it through the 2 effing years waiting time on SSDI until I qualify for Medicare...meanwhile 2 years of COBRA will surely land me living in my car!

That is my fear. Living on too long, too much to deal with, and ending up living in my car.

Yes, bad attitude day, I suppose you could say.

BUT I'm making, and have made about 5 so far, bracelets with letter beads that say "surviving". This is my quest, to make that more in vogue that "survivor", which I may have discussed earlier or not. If not, I'll go on about it later. I want to make a BUNCH of these bracelets (got more letter beads on sale this week) and give them out in my support group, and my friends at church who I know to have had cancer. Tiny little bits of positivity here and there, until I get bored sometimes, and frustrated.

Posting while my Playlist is running is messing it up, and I want to listen to music. Signing out...Shelli G., SURVIVING in AZ. Surviving the Dirty Pink Underbelly. For now...and for many years to come because if it's crap, that's how my life will go.
Posted by The Dirty Pink Underbelly at 4:35 PM No comments: