Sleep hath eluded me. I feel sleepy sitting here, but I followed my ritual and still felt bored lying in bed.

Bedtime Ritual:
Tonight it didn't seem to work, and I found myself staring at the ceiling, thinking of the writing I have not done, wishing I were better at it, and needing to use the restroom. I should probably do that now.

It's been 2 months since I last wrote. Every time it seems I think about doing it, I'm really too tired for it. I may not get much further than this, but here goes...

It's been nearly two months since I gave up on the search-and-destroy game with my veins, and got a new port. A Bard purple Power Port. Yes, I love the alteration, but have failed to come up with a name to fit in with it. I wanted to name the port, but nothing is coming to me, nothing feels like "it". Perhaps, after only one accessing, we are not yet bonded enough, my port and I. I must say, however, that my first accessing of it, almost four weeks ago, was a breeze! No tears, no white knuckles, though I had them ready and in place should I need them. Accessing number 2 in four days.

It was a hard decision for me to get another port. In my mind, port equaled chemo, or at least the resignation to the idea of some day having chemo again. Four appointments of blown veins, small veins, multiple attempts, crying, yelling, tears and sobbing finally changed my mind. The procedure was quick and done under twilight sleep (no, they did not make me watch Vampire movies...) with that lovely drug, the name of which escapes me. 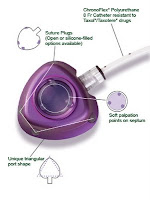 This is a picture of the very port I now have hidden beneath my skin, at the top of my right breast. I wished that the purple were glow-in-the-dark purple, and that is showed through my skin in the dark. That would be cool.

Of the three bumps the literature assures me are there, I can only feel one. This one bumps is so prominent, I cannot understand why I cannot feel the other two! Maybe when the incision heals up more completely.

Speaking of the incision, the liquid bandage stuff they put over it lasted nearly three weeks. In one spot, I could see a bit of blood. When the thing finally came off, the blood had coagulated and the skin did not adhere to itself as nicely as I would like  in one place. A week or so ago, I noticed a white spot in the unadhered area. Thinking it was skin, I picked at it a little. It seemed flappy, and flat, but I could not get at it with my fingers. I got my tiny tweezers and plucked at it. Out came a suture, about an inch long!!  My imaginary scenario is suturing the four anchor places, cutting the thread, and not picking it up before the incision was glued shut! No harm; it didn't hurt at all. It's still not really healing well in that spot though.

The only thing that really bothers me about it is, well two things maybe, that the sticking out part could have been the source of blood leakage which caused the scab which didn't let the skin close up smoothly, and that it just really speaks of being in too big a hurry during a procedure! I mean really! I don't even like to think about how they shuttle people in and out of those outpatient procedures. The nurse assigned to be with me during it was very nice and helpful; I'm just a tad annoyed over the hurriedness that must have led to leaving a cut piece of suture sticking out and then covering it with liquid bandage! 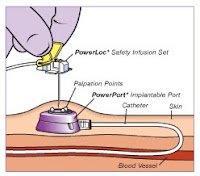 This is how it works: the tubing goes up, beneath my skin, and is then threaded in to blood vessel to turn and go down.  Special clamp safety needle thing must be used for these Power Ports, which are thus named because they can receive more powerful infusions, such as are necessary for dyes used in scans.

I am pleased to have it now, and hope it lasts a good many years, possibly as many years as I have left.

I have more to write and whine and ponder, but I find I am feeling sleepy. This is a good thing, yet I must be sure to get back to this before long. I shall leave myself some clues, and see if I get back on the right track - I need to confess more reasons for why there hasn't been much posting action here, and ponder and discuss my feeling toward death, a topic over which I sometimes obsess, and which was brought up at a party by my good and dear friend Jamie.

But for now, Second Chance for Sandman...!
Posted by The Dirty Pink Underbelly at 12:48 AM No comments: