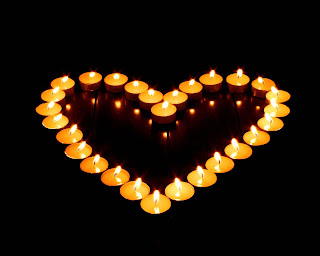 RIP, Donna Peach, with much dancing.
Posted by The Dirty Pink Underbelly at 12:15 PM 3 comments:

I told the tale of the radiologist who failed to read my PET scan far enough south to find the obvious lesions in my femur a few posts ago (here) as I contemplated the emergent February pattern on my skeletal event horizon. To recap, there is lesion on my femur that was obviously visible in my December 2012 PET scan, providing the one looking actually looked.

The next time I saw my R.O. (Radiation Oncologist), Dr Z, she had the computer in the exam room, showing me the MRI I had done of the thoracic region right before my surgery. I asked her if she would pull up July's PET scan and see if the lesion in my femur had also been there in July.

YEP. There it was. Clear as day, if one but scrolled farther south through the slides.

If your brain isn't connecting the dots right now, let me help. The lesions that in December put me at risk of a femur fracture were also there in July. Also unreported. Had they been viewed and reported in July, would we have been able to stop those cancer cells in their tracks with some radiation, before more damage was done, and avoid this recent surgery and month of hell-pain and expense completely?

I have to think yes.

I saw my PCP/PA yesterday and she recounted to me her "chat" with the reading radiologist when she requested, over a month ago, that he take a re-look at the scan. Apparently, he was an arrogant prick (her words) to her on the phone, told her that if he had seen something he would have written it in the report (obviously he needs to be reminded that he won't see anything if he doesn't look), and that even though he didn't mention past evidences in the pelvis, since there was nothing new or active, no, he wasn't going to make an addendum.

Arrogant bastard. This was before Dr Z called him with evidence that he did, indeed, need to make an addendum, and that he had, indeed, failed to "see" and to "look". Again I hope she was her arrogant best on the phone with him.

When I see her next week, I will ask if she ever received that addendum.

I have cancer all over my bones. A PET Scan scans from mid-forehead to mid-thighs. I expect that whomever reads that scan looks through ALL of it, not just the areas where there was activity noted on the previous scan report. Cancer on the bones spreads. It grows. It travels. One of the reasons I have PET scans is to look for spread, growth and traveling.

While visiting with my PCP/PA yesterday, she confirmed that the same arrogant jerk read the December scan and July scan. My next move is to see if he read the one prior to that, and see if I can tell (by comparing to Dec and July) if the lesions were there, and how far back.

After I compile what I can discern from my reports and CD's that I always insist upon having, I plan to write a letter to the head of whatever practice this A-hole is with, and copy whatever board by whom he is certified. Or write to the board and copy the practice?

Suggestions on chain of command for writing this letter are appreciated.

What are your thoughts?

What other measures would you take?
Posted by The Dirty Pink Underbelly at 11:42 AM 12 comments:

Whooshed out of the hospital with about 10 minutes notice late on a Sunday night for a terrifying ride on a tall gurney (I guess they steer better when they're really high?) in the back of a van speeding down the freeway and into the rehabilitation facility.

Bed to gurney to bed...those transfers are mortifying. People in a hurry who might accidentally move that leg wrong and cause me a world of hurt. (My gurney guy turned out to be very nice and thoughtful though.)

And after the dumping into the bed, I realized that I had been dumped onto...THIS: 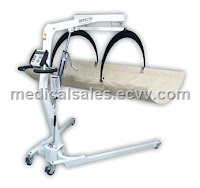 Which actually, when in the process, felt like THIS: 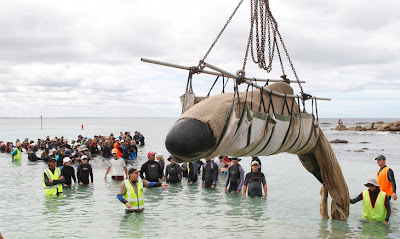 And the rest of that first night I hardly slept at all, because of not only the pain, but my roommate insisted that she has to sleep with the lights ON so that if she gets up in the night she won't trip on anything.

She is actually not able to get out of the bed by herself.

Next night, one of the CNAs turned the lights out after she was asleep, and after a few conspiring eye-rolls I realized that I was not alone in finding this ridiculous. But she was old and infirm. In her mind I'm sure it all made perfect sense. They put me on the list to move to a different room.

Meanwhile, using the bathroom was still a horrific event, still a bedside commode, and getting into bed still involved yells and loud moans.

I'm bored with the telling of this, so I'll try to get this up there, brief and unentertaining though it may be.

My sister put me on the list for a single room, no roommate, which was said to be a first come-first-served thing. Since I had the sympathies of all those who make things happen, I was moved to a private room after 2 nights.

Thank goodness and bless the hearts of all who made that happen. I could have ended up with worse than lights on all night and been so much more miserable.

Thank goodness because I ended up there for TWO WEEKS!  Physical therapy was hard, but not painful like it started out in the hospital. People helped me in and out of bed to use my potty-by-the-bed until I could do it myself, and only one of them made me cry. They gave me my medicine and told me when to eat. Actually I can see why sometimes the elderly LIKE to stay there and they sometimes have to make them leave. Once I got home I had to do a LOT more for myself, and it wasn't easy at first.

To pass the time, I berated and documented the food. The photos I think speak for themselves. 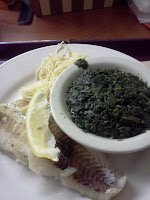 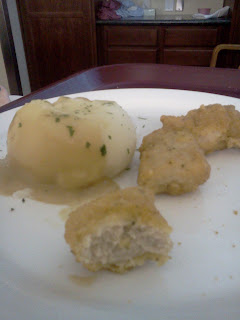 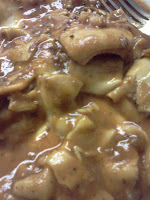 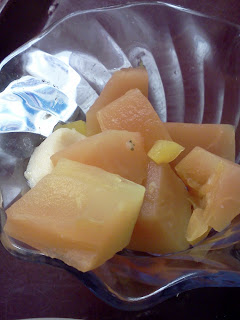 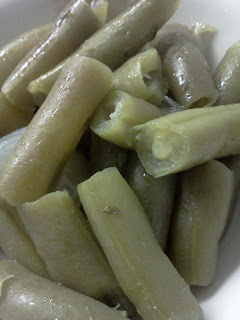 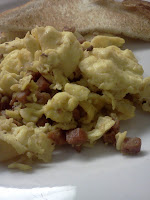 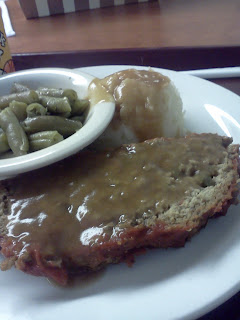 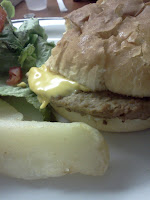 Now that you're running for the phone to order a pizza, let me just say that yeah, it was that bad. Some was edible, but all in all, worse than school food x100. But people brought me in good food on several occasions and I certainly didn't starve. Among the things brought in to me, Panda Express, Chipotle, Wendy's, Taco Bell, Filliberto's, and that yummy place Stacie took me a while back with the amazing green chili pork. I'm surprised I didn't gain weight while I was there.

Who knows, since weight is suddenly being done in metric everywhere. They didn't check with me first.

As the two week mark began to roll around, I began to worry that the possibility of my discharge was going to be overlooked until it was too late for it to happen before the weekend was over. I was getting myself up and down (though I still needed help most of the time getting the one leg in bed), I was dressing myself, and I could have gone all day and not had a soul check on my except at med times, and to wake me up at odd hours of the night to check my vitals. I knew when I started to be hypercritical of everyone's job performance and the organizational structure of the entire center (oh there were things I could have straightened out and made run much better!), I knew I was ready to go home. We tracked down the appropriate person, she checked reports and came back to me saying that they and my insurance had decided that I was not strong enough and needed to stay longer.

I had just used the real toilet for the Occupational Therapist and satisfied her that there was "no reason" I couldn't go home as far as she was concerned.

I had walked 200ft with the walker in Physical Therapy the day before.

My staples were out of my incision and the surgeon said I was healing very well.

I am doing almost everything for myself. For whom else do I need to perform? Tell me and I'll do it!

Go back and check with those people again.

Which she did, and realized that she was going off WRITTEN notes that did not match what was in the computer (i.e. were outdated), and that indeed I seemed able, if I desired, to be discharged. DUH!

(Operational and organizational incompetence. My increasing awareness of this is why they needed me out of there and why I needed to be gone!)

So I was discharged and sent home with prescriptions I would need for the interim for pain meds I was taking etc, until I could get to my regular doctors.

Only the prescription for one of the narcotic controlled substance pain meds was written wrong. And there's no phone call to fix narcotic controlled substance pain meds prescriptions. And the rehab facility turned out to be unwilling or unable to correct their mistake (operational and organizational incompetence), so I went down to the wire on this particular med, which turned out to be a total hassle to fill (as all drugs of this level are, because everyone in pain is a criminal trying to scam drugs, dontchaknow) and after a long afternoon at the oncologist yesterday, it took my mother 4 pharmacies and until 9:00pm to get it for me.

But the important thing is, I am home. My pain is almost managed, and is not severe. I can get in and out of bed by myself, go to a real toilet by myself and get around my house. My son is taking care of everything in the house and my mother is driving me to appointments and I even got a shower with her help.

As I read back over this post, it is boring and my tenses very often do not match. This usually really bothers me, but today I am playing the pain meds card and letting it ride. I have more to tell in this femur tale, so come back soon.


Posted by The Dirty Pink Underbelly at 4:40 PM 4 comments: