I have a few things on my mind that I'd like to vocalize. Er, uh, type, for the benefit of those closest to me, who ironically will probably not read this anyway.
1. I STILL have Stage IV Metastatic Breast Cancer. And it's STILL incurable.
Okay, I put you all through that whole  thing in the hospital right after that diagnosis, and I'm sorry for that, but the diagnosis stands!
No, I was not, at any point during the past 2 years, "in remission". Sorry to fool you all with the months of seeming functionality. Sorry for having hair and fooling you all by not looking like I have cancer.
I'm still here at the 2 year mark. The length of time I have lived with this disease is in no way a signifier of how much longer I will be able to do so. There's no magical magnifier formula adding months or years to my life for every month or year I manage to live with cancer.
2. The Tables can Turn Quickly.
I did well this past year. Tumor markers were relatively stable. Scans were good. No spread was found.
My tumor markers, however, specifically the CEA, have risen over the the past few months. 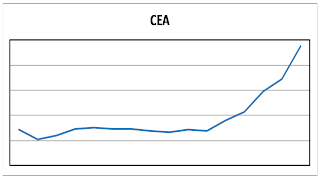 This post is astoundingly powerful. I don't even know what to say except I'm here with you and I'm not judging. Thanks for sharing your reality.

Thank you, Nancy, and thank you for reading. I really think that unless I am painfully blunt, those closest to me won't get it until I'm on my deathbed.

And I had a lot of positive feedback when I shared this on Inspire.com as well...women thanking me for speaking what is difficult for them to speak.

TG,
You are a fierce talent.

You have food issues.
You are addicted to sugar and wheat.

Exercise has almost nothing to do with it.
This link may...or may not reward effort.

If this post is inappropriate, please remove. I don't trust my own judgement sometimes.

from a fan, good health,

mehitabel, thank you for the compliment on my writing.

As far as pointing out my food issues, etc, I'm afraid that garners you the same "no shit" response that the facilitator of my support group got in my post a couple of posts ago about depression.

Also, not sure pointing it out now does any more good than my mother pointing out that I should exercise with my Stage IV extensive bone mets.

I have a feisty, too. :)
Putting my finger on the throat of your food issue is for nought.
You're not caring to get the evolutionary point.
as burroughs put it, we all have a little parasitic being that works against our interests.

On the mbc board i posted to my friend FOL.
Best tip on board in many months. Beat the pants off Racheldon's Oz-crap.
Iodine. Nobody knew. Iodine, oh 'bout 6 or 8 mg. a day seems to damn near halt bc.
I put up a link. Doctors. Studies. X-rays of shrinkage.
who cares?
lead balloon.
much more interest in b17, mistletoe injections, root canals, mushrooms.
iodine not exotic enough?
iodine not expensivie or difficult enough?
no interest whatsoever.
maybe it's me.
old man who had lymphoma.
that's it isn't it?
wrong tribe.
wrong tribe.

I do know I have issues. I do know our food supply has issues. I question what good beating myself up over it is doing for me right now. Iodine? I tried it for my thyroid several years ago, maybe I'll run out and get some more and cure my cancer. Did iodine cure your lymphoma? Thanks for sharing, although, for the most part, I have a hard time understanding what you write.